​Aristotle tells us that everything we do together is political. This sounds strange until we understand that the Greek understanding of that term is synonymous with social, and in realizing that we would say “of course." What is hidden behind that transformation of our normal way of thinking about ‘politics’ is that we have lost something valuable in what Aristotle was driving at. The social characteristic of humanity is an extension of friendship. Maybe the highest good in life is friendship, friendship with God and friendship with neighbor, and in this distinctly Christian realization and admonition we can extend our friendship across the ages to Aristotle.

This is why, as the headmaster of Concordia Academy-Wichita, I am so happy to attend to our society of scholars that bridges time - classical. We are a group of friends intent on becoming more useful to each other, and closer to God. Coming from New York to Wichita to teach in the exciting field of high school classical Christian education, my wife Tracee and I felt many separate threads of our lives coalescing in this mission. When cities are at their best they seem to be the same: a society of friends. When they are at their worst they are battlefields of warring self interests, characterized by difference that is dissonance. Man finds discontent in himself, and spreads it to his neighbor. I have experienced how a good school, a centered community, can radiate the opposite of strife. But how does man overcome his inner and outer state of war?

​It is marvelous that man can find his center in Christ, the great mediator, and that we can be citizens both of the earthly friendship and the heavenly kingdom, finding and spreading peace in our communities with a fearless devotion to the knowledge and wisdom found in the school of wisdom and virtue that is the society of our Lord. We rise to the times in which we are born, and this is a time that calls out for a reaffirmation of what calls us higher, the restoration of holy friendship. 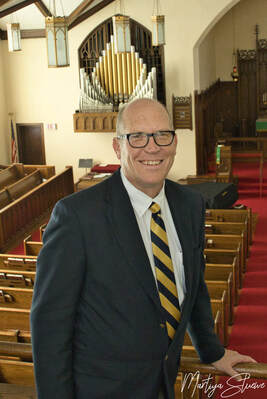 Dan Snyder is a teacher, a former Marine, video game designer, international classical singer, and professional church musician. His work has been featured and reviewed in Wired magazine, PCgamer, and on the Discovery Channel, as well as in Opera News, the Kurt Weill Newsletter, and many other publications. Transitioning from the USMC as an air traffic controller and computer programmer to the U.S. Army Chorus, he performed regularly at the White House. Mr Snyder’s educational background includes time as a training designer with the American Red Cross as well as the US Marine Corps Training and Education Command in Quantico, VA, and later as a contractor with various defense agencies. He has studied at Bryan College, George Mason University, Mannes Conservatory of Music, and did graduate work at The New School in New York City, where he also holds a certificate in screen writing from the film school. Mr. Snyder taught logic, great books, and rhetoric at the Classical School of Wichita from 2013-2022, having relocated to Wichita from New York City. His educational pursuits, which include a focus in several languages, continue with the completion of graduate studies in classical Christian education at New Saint Andrews College. He and his wife Tracee, a professional musician, are members of Immanuel Lutheran Church.
Support Us